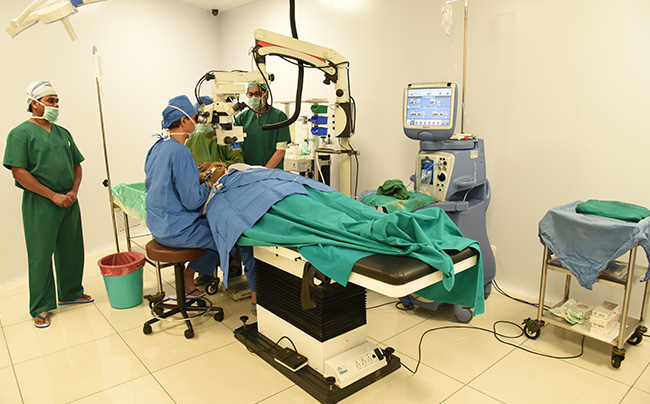 Age-related macular degeneration (AMD) significantly affects visual functioning and is one of the leading causes of blindness. It has been estimated that almost 196 million people all over the world would be affected by this condition till 2020 and the number increased to 288 million in 2040.

Concerns have been raised in context to exacerbation of wet AMD after cataract surgery. Theoretical considerations have indicated intraretinal cystoid changes, increased subretinal fluid, macular hemorrhage, and requirement of aggressive treatment in the management of AMD. Advocates of this postulate also mentioned the mechanism behind the rapid progression of AMD. These include increased light exposure and an increase in the inflammatory mediators during surgery.

A cohort study was done on four thousand five hundred seventy-seven participants (8050 eyes) assessed the risk of advanced age-related macular degeneration (AMD) developing after cataract surgery. The study concluded that there is no clear effect of cataract surgery on the risk of progression to advanced AMD.

Another retrospective cohort study, done on 81 eyes, concluded that cataract surgery can be safely done in patients with both cataract and wet AMD. Patients with stable preoperative fluid on OCT did well postoperatively. In the same study, it was also concluded that there was no negative effect on neovascular processes.

It is to be noted that providing acute vision to the patients suffering from both cataract and AMD is a tough task. With the cataract, the visual performance is greatly reduced due to glare over the vision while AMD results in a significant reduction in visual acuity at a later stage. Late-stage AMD seriously affects retinal health leading to reduced vision. Thus, to improve the patient’s vision and to meet his expectations, choosing the right implant during cataract surgery further improves the vision.

A study done in this regard concludes that a new IOL strategy may help in increasing the eyesight in such patients. In patients without macular degeneration shows a good recovery after cataract surgery. However, the same was not found to be true when both cataract and AMD are comorbid and the surgery includes the use of normal IOLs.

To treat the patients who have both the diseases simultaneously, a new IOL was analyzed. This new IOL, named as iolAMD Eyemax Mono™, is a hydrophilic acrylic lens, which is used to enhance the quality of the retinal image.

This study examines 244 eyes for visual acuity which had undergone cataract surgery and iolAMD Eyemax Mono™ was implanted. The surgery in these patients was done between 2015 to 2017. The IOL is designed to increase the area for 10 degrees around the foveal central. In comparison to iolAMD Eyemax Mono™, the standard lens provides only a 5 to 7.5 degrees of retinal eccentricity.

Surgery was done through the standard procedure and the 3 surgeons were involved in the surgery. The surgery was done under anesthesia and a mydriatic agent was administered in the eyes to dilate the pupil. A viscoelastic device was filled in the capsular bag and then the lens was then fitted. The mean age of the patients undergoing surgery was 80 years and the follow-up was done for 3 months.

The wide-angle design of the lens helps in controlling the blurred vision in patients with macular disorders. The patients achieved a double letter distance with this new implant as compared to that was achieved in the standard IOLs.

The patient should come to ophthalmologists with reasonable expectations as there are certain limitations associated with improvement in vision. Although magnifying IOL offers certain benefits they reduce the field of vision. It is also to be noted that cataract surgery does not cure or stops the progression of AMD but it improves your vision.

EyeMax Mono™ is a registered trademark of Invua Medtech Limited